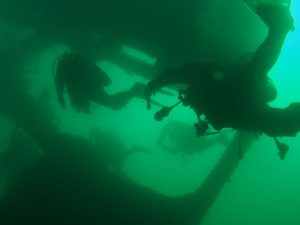 Yes! that is why I do it

Having just returned from an annual diving holiday to the Isles of Scilly and reflecting on the trip, it occurs to me that the whole concept of diving safety is often viewed as a very negative approach.

The diving in Scillies is generally superb even though it’s location tends to ensure it gets hit with just about every wave of bad weather the north Atlantic can throw up. The last couple of years can best be described as ‘interesting’.

For 2014 though other than a somewhat less than smooth crossing to the islands, the weather was more than just kind but perhaps best described as idyllic – flat calm, sunshine and pretty good, rising to exceptional viz on occasions.

As a result the whole team has already confirmed a booking for 2015!

Taking the weight off

Although diving is often described as an adventure sport, it is also very much about relaxation and enjoyment. The adventure should come from the thrill of exploration rather than the difficulty of the diving. Despite the challenges of previous years, the diving has been incident free due in no small part to the experience of the divers and the skipper (see below) and a willingness to recognize that just sometimes it is worth missing a dive or two when the conditions are not suitable. This really doesn’t hit home until you have such an excellent year as this and you have time to reflect on the differences.

You can read the full article on the BSAC website